In August 2016, Nestlé purchased the Middlebrook well in Elora, Ontario despite the municipality’s attempt to buy it to safeguard their water supply. This sparked a national outcry.

A myth of abundance, lack of monitoring, and a profit-driven market allow our communities’ water sources to be exported out of local watersheds, never to return again.

Nestlé profits from water all over the world. Communities are saying “no” to Nestlé’s water grabs. It’s time to stop the corporate takeover and protect water for people by boycotting Nestlé and bottled water.

A small Ontario county fights back

In the summer of 2016, southern Ontario faced harsh drought conditions. Yet Nestlé, a giant bottled water corporation, continued pumping, with permits, removing up to 4.7 million litres of water per day from the Guelph region.

Water bottlers have to pay $503.71 for every million litres of groundwater they take. Although this is up from the previous $3.71 fee, it still only amounts to 1/20th of a penny for every litre that Nestlé pumps and sells.

Between 2011 and 2015 the aquifer that supplies the main Nestlé production well dropped about 1.5 metres, while Nestlé’s takings increased 33 per cent. A 2016 City of Guelph report found that Nestlé’s water takings pose a risk to Guelph’s drinking water security.

In December 2016, Nestlé proposed a “partnership” with the local township to share the well. This could allow the company to avoid stricter permit rules that are being proposed.

The Middlebrook well is Nestlé’s third in the region. It sits on the traditional territory of the Haudenosaunee, also known as Six Nations of the Grand River. More than 90 per cent of people in Six Nations do not have clean, running water. Local groups like Wellington Water Watchers, Save Our Water, and the Guelph and Centre Wellington Chapters of the Council of Canadians have mobilized thousands of people to protect water from Nestlé.

Nestlé’s bottled water operations in B.C. have also stirred up opposition from communities trying to protect their water. Despite the 2015 drought, Nestlé continues to extract 265 million litres from a well in Hope, located on Sto:lo Territory. The well connects to an aquifer that 6,000 nearby residents rely on.

Nestlé isn’t the only one putting local watersheds at risk. Agriculture Canada reports that 83 per cent of Canada’s bottled water exports come from B.C.

B.C. allocates water permits based on the “first in time, first in right” (FITFIR) system, which gives priority based on who acquired a well first. Water permits continue indefinitely, meaning there is no expiration date on Nestlé’s bottling. The FITFIR system fails to consider growing water scarcity, Indigenous rights and title, and water protection and conservation. 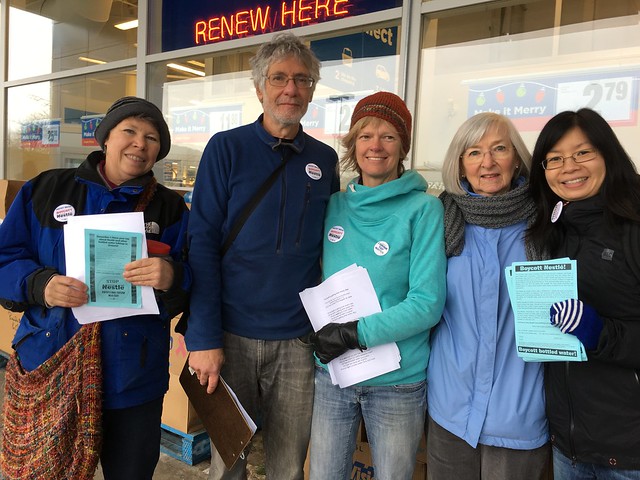 Nestlé is one of the world’s largest corporations, with annual revenue of $92 billion, $9 billion of which is from the sale of its 52 bottled water brands.

Nestlé’s Chairman of the Board Peter Brabeck has positioned himself as an “expert” on the global water crisis. Nestlé chairs the 2030 Water Resources Group and is a founding signatory of the CEO Water Mandate. The CEO Water Mandate, a public-private sector initiative launched by the United Nations in July 2007, puts corporations such as Nestlé, Coca-Cola, Suez and Veolia directly into a position of influence over global water policy and presents a clear conflict of interest.

In July 2011, Brabeck sparked a firestorm of criticism in Canada over talks with the Alberta government to establish a “water exchange” that would allow water to be sold as a commodity.

The lowdown on bottled water

Water sources are under stress from increasing commercial use, population pressure and drought-inducing climate change. A 2010 Statistics Canada study warned that renewable water in southern Canada declined by 8.5 per cent between 1971 to 2004.

It takes 5.5 litres of water to produce a 500 ml bottle – 0.5 litres in the bottle and another 5 litres contaminated when making the plastic bottle from oil. As Your Water Footprint author Stephen Leahy points out, “The five litres consumed in making the bottle are as real water as the 500 ml you might drink, but hardly anyone in business or government accounts for it.”

The Ontario government recently extended a moratorium on new or expanded bottled water takings. While this is a positive step, it doesn’t go far enough – a full ban is needed.

A recent poll revealed that 82 per cent of Ontario residents want the provincial government to permanently stop issuing permits for extracting groundwater to sell as bottled water. Canadian bottled water exports to the U.S. have increased by 383 per cent in eight years.

Provincial governments must review water rates for other industries, hold public consultations on how to prioritize water uses, and fund job retraining for workers in the bottled water industry.

Wasting our limited water on frivolous and consumptive uses such as bottled water is a recipe for disaster. We must safeguard water for communities and future generations. Until bottled water takings are banned, we need to send the message to Nestlé that corporate profits should never come ahead of communities’ needs. Join the tens of thousands of people that are taking a stand against Nestlé and bottled water by boycotting it.

Ontario: Tell your MPP to stop Nestlé from pumping on expired permits!